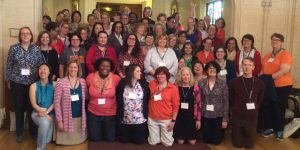 They quickly added to their team Mary Gray-Reeeves, then Bishop of El Camino Real, and Helen Svoboda-Barber, then Rector of Harcourt Parish, Gambier OH.  With administrative support from David Wantland, then candidate for Holy Orders, they designed the first Leading Women for The Episcopal Church.

This conference included women from three Anglican Provinces.  Leaders and Participants were from The Episcopal Church.  Our Chaplain was from the Anglican Church in New Zealand, and a Guest Speaker attended from the Church of England.   Presiding Bishop Katharine Jefferts Schori offered the Lay of the Land Keynote Address.  We hosted about 60 participants at this first event.